A Walter Camp, Football Writers of America, USA Today and Fox Sports second-team All-America selection … Named a third-team All-America by The Associated Press and Athlon … A first-team All-ACC selection by ACSMA and the coaches … Named the state Division I defensive player of the year by The Roanoke Times … A first-team all-state selection by The Roanoke Times … Started all 13 games … Was in on 987 plays, 867 on defense and 120 on special teams … Had 54 tackles, including 4.5 for loss and two sacks … Recorded two interceptions, 15 pass breakups and a forced fumble … Helped lead the Hokies with five tackles, also adding a sack and a break up in the opener against William & Mary … Broke up two passes and made five tackles in the win at Ohio State … Had four break ups and made two tackles against East Carolina … Finished the Georgia Tech game making two tackles and breaking up two passes … Had three tackles and break up against Western Michigan … Returned an interception 47 yards for a touchdown, and added four tackles and two break ups at North Carolina … Was named ACC Defensive Back of the Week for his performance at North Carolina … Made five tackles and broke up a pass at Pitt … Had five tackles against Miami and Boston College … Made two tackles in the win at Duke … Had five tackles and a break up at Wake Forest … Made seven tackles in the win over Virginia … Had an interception and four tackles in Tech’s Military Bowl win over Cincinnati … Had offseason wrist surgery for a fracture he played with most of the season. 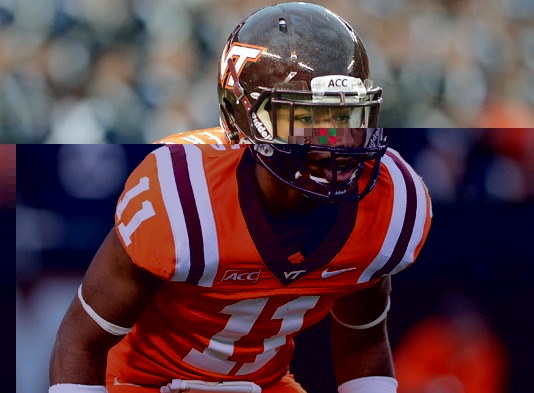