One of the nation’s top dual-threat quarterbacks who is poised for an outstanding junior season … An inspiring leader with toughness who can will his team to victory and did so several times in 2013 while playing through injury … Can extend plays with feet and arm … Played in 23 career games with seven starts and owns a 4-3 record as a starter … Has accounted for 33 career touchdowns (14 passing, 17 rushing, two receiving) … Completed 174-of-296 passes for 2,134 yards with seven interceptions and 14 scores through the air … His .588 completion percentage ranks first in MSU history … Rushed 166 times for 947 yards … The 17 rushing scores are fourth-most among quarterbacks in MSU history … Leads all returning SEC QBs in rushing TDs and rushing yards … Thrown for over 200 yards five times in career and rushed for over 100 yards four times (achieved both in in the same game once) … Among MSU quarterbacks, trails only Don Smith (1983-86/nine) and John Bond (1980-83/five) in 100-yard rushing games … Racked up 3,081 yards of total offense in just two seasons, neither as the full-time starter … A leader in the community as well and a member of the SEC Academic Honor Roll … Came to Mississippi State after a successful prep career in northern Louisiana. 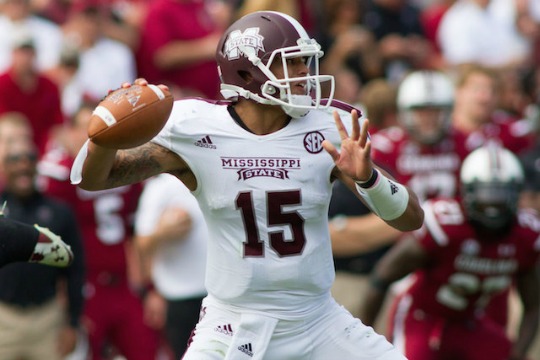